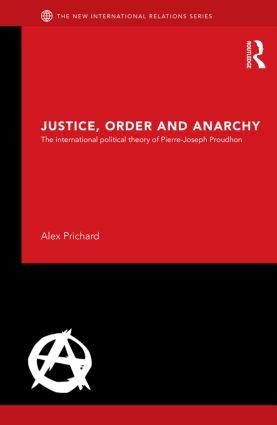 This book provides a contextual account of the first anarchist theory of war and peace, and sheds new light on our contemporary understandings of anarchy in International Relations. Although anarchy is arguably the core concept of the discipline of international relations, scholarship has largely ignored the insights of the first anarchist, Pierre-Joseph Proudhon. Proudhon’s anarchism was a critique of the projects of national unification, universal dominion, republican statism and the providentialism at the heart of enlightenment social theory. While his break with the key tropes of modernity pushed him to the margins of political theory, Prichard links Proudhon back into the republican tradition of political thought from which his ideas emerged, and shows how his defence of anarchy was a critique of the totalising modernist projects of his contemporaries. Given that we are today moving beyond the very statist processes Proudhon objected to, his writings present an original take on how to institutionalise justice and order in our radically pluralised, anarchic international order.